Thank you to Henry Kraatz for your generous donation to the LANCE Armory!

RETURN TO THE ARMORY 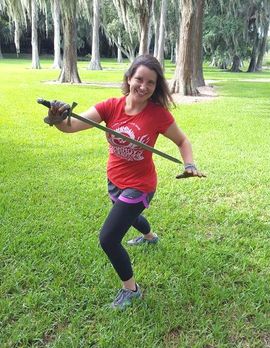 Marissa Kraatz shows off The Shrew fresh
from Starfire Creations!
The Shrew was created by Starfire Swords, now known as Creations, and donated in April of 2016. It is a stainless steel, hand-forged blade with edges blunted for stage combat. ​

The story behind the sword's name is an unusual one. When asked to choose a name for the sword that his donation would go towards, Henry was initially at a loss for inspiration. He asked his daughters for help, but was overwhelmed by the number of suggestions they offered. Henry was close to naming the sword after his dog when the love of his life, his wife of over thirty years, entered the room. With an arched eyebrow, she demanded, "Name it after your wife!" And so, in good humor, he did.

The Shrew was the first weapon donated to LANCE through the Sword for Hire fundraising program. Our organization is exceedingly grateful for this inaugural donation. 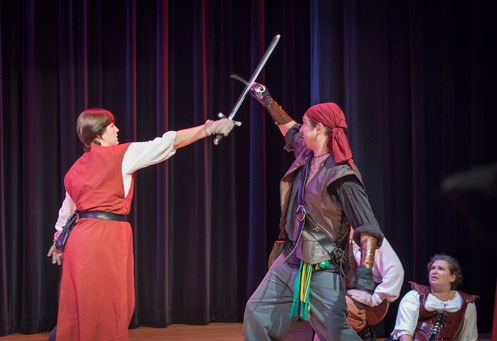 Shrew in hand, Amy Bowman attacks the First Mate (AJ Harrett) in the final fight
of the Orlando Science Center Pirate Show.
The Shrew’s debut performance was in the Pirate Show performed by LANCE Orlando for the Orlando Science Center as part of their Pirate Week celebrations. The pirates of the LANCE crew staged a tournament to determine who would take over as captain of their ship as their current captain was stepping down to retire. ​

The Shrew was carried into battle by Amy Bowman in her role as the plucky Cabin Girl Jacqueline “Jack” Roberts. In the final match of the pirates' tournament, Jack was pitted against the First Mate, Wade Darkwater, who insisted that it be a sword fight. To the delight of our young audience, both Jack and Wade fought skillfully, but only one could become the new captain. The ultimate victor of the tournament was Jack, now Captain Jack, and her trusty blade The Shrew. ​

​You can watch a video highlighting The Shew's involvement in the Pirate Show and even the full show right here! Enjoy! 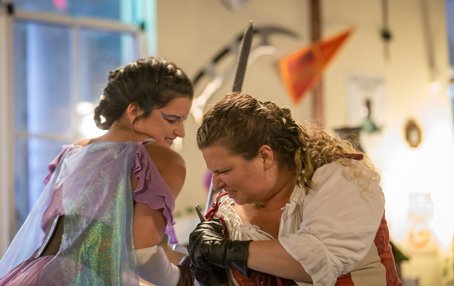 Ysvelta (Dominique Turner) and The Shrew fight
Morgan (Heather Walker) to a standstill during the first
match of the tournament!
In LANCE Orlando’s first show of 2017, The Shrew was once again carried into battle. It made its appearance in the starting fight of the Feast of Fools tournament hosted by the Cloak & Blaster.  While the king and queen of the faeries were busy fighting each other, their mischievous minions were running amok and playing pranks and tricks on the humans of the realm. Determined to put an end to the mayhem, the humans planned a grand banquet for Queen Titania in order to try and establish peace with her -- an attempt that was quickly thrown into disarray when King Oberon crashed the party!

Wielded by Dominique Turner in her role as Ysvelta, faerie handmaiden for Queen Titania, The Shrew was used in her fight against Morgan, the human innkeeper of the local village as played by Heather Walker. Though Ysvelta was disarmed in the first half of the fight, a few cunning tricks (but definitely not cheating!) saw her take home the win for Titania’s faction in the tournament.

​With Ysvelta’s victory, The Shrew is once again a winner! 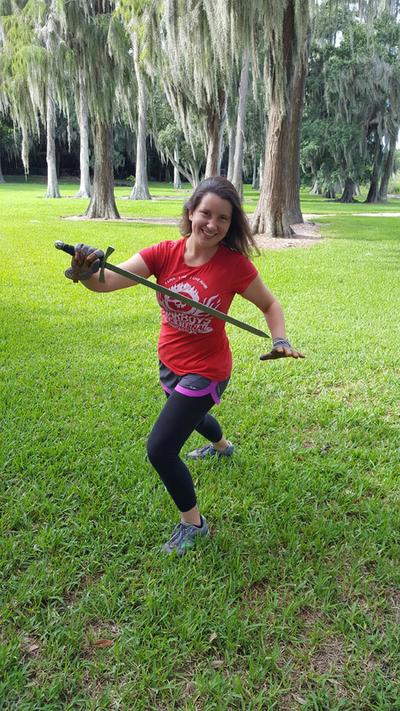 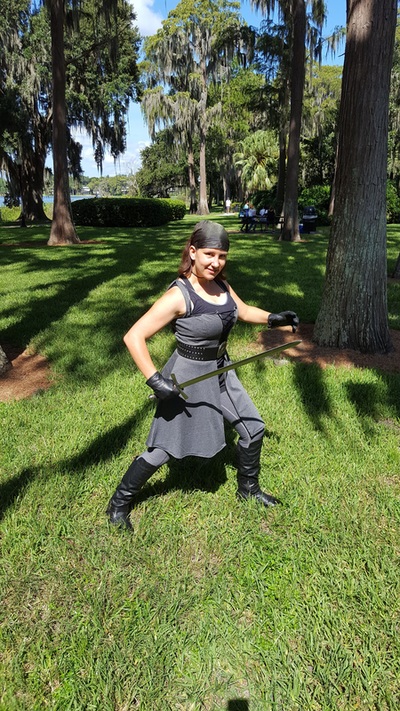 Marissa poses with The Shrew. 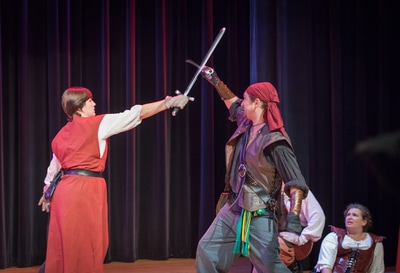 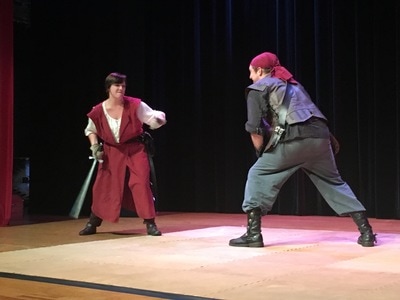 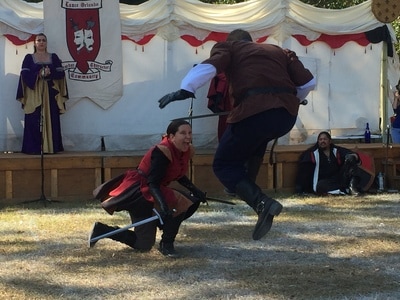 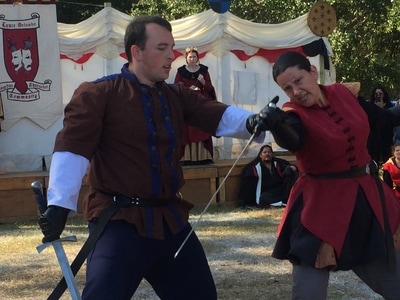 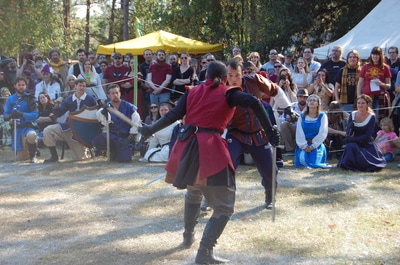 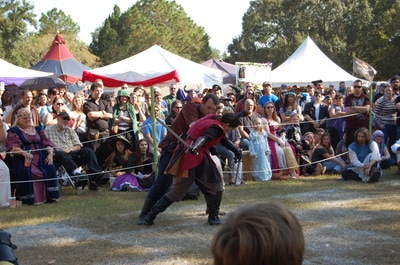 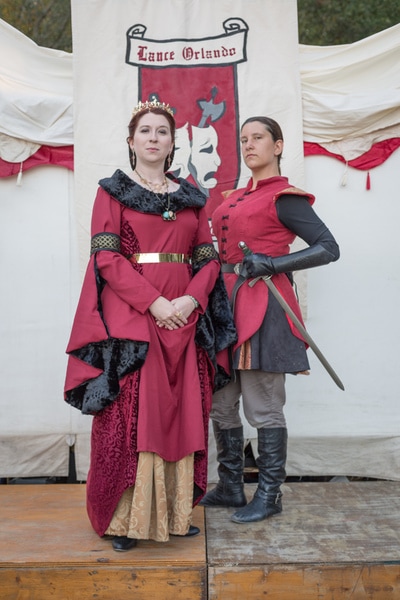 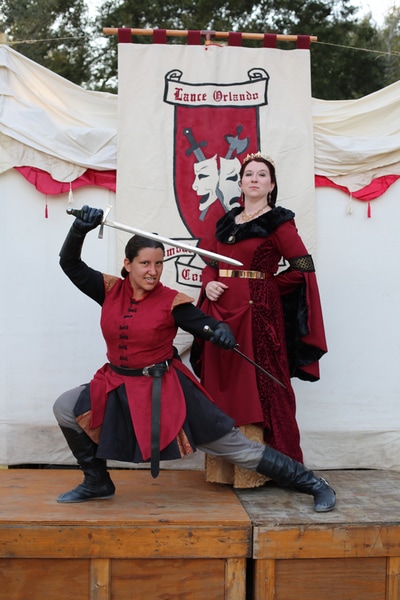 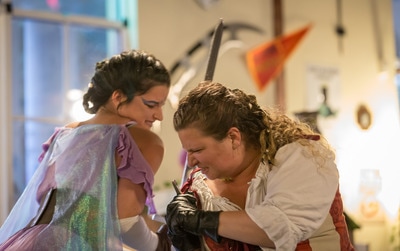